Wow. I expected a spike in traffic after the Flash appeared on last night’s Smallville, but I wasn’t expecting a three-fold increase!

It’s all on the Flash site — no sign of spillover onto this blog, for instance — but Bart Allen’s 15 minutes of fame have propelled him to the #3 spot (right after the Teen Titans and Raven). 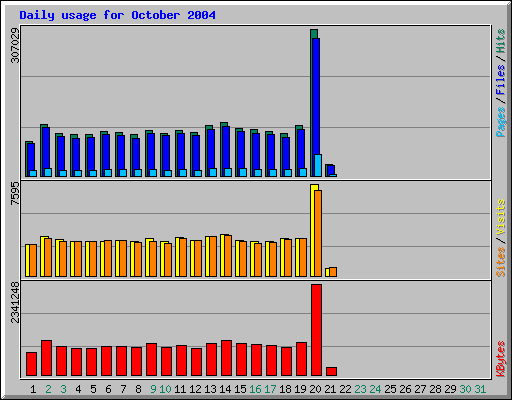 The small bar on the 21st is there because the graph is updated at 4:00 AM, so it always shows 4 hours of that morning’s traffic. The pages/files/hits distinction is that files also includes images, scripts, stylesheets, etc. and hits includes all requests, including reloads, 404s, and so on.

The last time I saw this big a change in traffic was the sudden jump in hits to Linda Park (the Flash’s wife) in 2001, when casting for Enterprise was announced with a then-unknown actress with the same name. I saved a picture of the search terms graph. I’ll have to see if I can find it.

One thought on “Smallville Spike”