If I’m trying to get somewhere other than home after work, I’ll use GPS to get an idea of the time remaining and the fastest route. Since I’d rather avoid the freeway during rush hour, it keeps trying to send me on these zigzag paths through residential neighborhoods to avoid backed-up arteries or just avoid busy intersections. I used to follow those routes, but after a while I started noticing other cars ahead of me that were clearly doing the same thing. It’s not just one car being added to that lumpy narrow road with lots of driveways, stop signs, kids on bikes and people taking out the trash. It’s a lot of cars. And of course we’re following the same apps drawing from the same data, so we’re all taking the same side streets, not spread out among all of them.

If there’s a big difference, that’s one thing, but for two or three minutes? What’s the point?

Of course the navigation app seems so testy when I decline to be part of the problem, and it has to keep recalculating…

Wow, is the year over already? Here are this blog’s five most popular posts of 2012.

Don’t Use Third-Party Links in Email – Object Lesson: Comic-Con Registration (March)
Being both a comics fan and a long-time email administrator put me in the perfect place to analyze what went wrong when Comic-Con International tickets went on sale. I got linked to by a couple of high-profile sites, resulting in a lot of views during the first few days after the debacle and making March 3 the blog’s busiest day of the year. It quickly trailed off to almost nothing, and didn’t even get a blip when tickets for next year’s con went on sale. It’ll probably be forgotten next year.

Tablet Tip: Using Bookmarklets with Chrome for Android (August)
The two things that seem to pull in perennial traffic are popular images and troubleshooting articles. In this case, I describe how to use bookmarklets on Chrome for Android, since the normal way (clicking on a menu/icon) doesn’t work. (Two words: auto complete.) This one started slow, but since mid-September it’s pulled in more and more views every month.

Nexus 7 + USB Cable = Finally! Photo Uploads Without a Laptop! (October)
This post detailed how I was able to connect my Nexus 7 tablet to my camera, to thumb drives, and to keyboards and mice. It turns out all you need is a $1 cable adapter and a $3 app. This has been another slow but steady post, with a spike in visits shortly after Christmas. These two troubleshooting posts are actually in the top three for December (

Photos: Solar Eclipse from Los Angeles (May)
I went out to a hilltop park in Palos Verdes to watch May’s solar eclipse, which was an 85% partial eclipse in Southern California. I stumbled into an impromptu eclipse festival, with lots of individuals and groups who had all brought different equipment and were happy to share. A link from Patch.com brought in a lot of visits for the first week or so, and then it trailed off with a couple of spikes, one in June (not sure why) and another during the November eclipse.

WonderCon in Anaheim – A Great Weekend Comic-Con (March)
Another post following the typical event pattern of a sharp initial spike and steep drop-off, but this one hasn’t vanished quite so thoroughly as the others…probably because of the uncertainty for most of this year as to where next year’s con would be. What I find particularly interesting is that more people have viewed this post than my write-up of this year’s San Diego convention.

Want to see what Los Angeles traffic looks like on a typical Friday evening? You can! A co-worker pointed out to me that you can view statistical traffic on Google Maps in addition to live traffic. To see it, go to Google Maps, enable traffic, then look at the inset traffic key and hit “change.” You’ll be able to choose a day of the week and time.

A Scott Pilgrim fan tracked down the real-life locations in Toronto that Brian Lee O’Malley used as reference, then took photos to match them up with the comic panels.

It reminds me of a story that O’Malley told at Comic-Con last(?) year about the movie production. They tried to use actual locations when possible, and at one point went to film a scene with a particular phone booth, only to find it had been torn out. They rebuilt the phone booth for the scene!

How To Be a Retronaut has a fascinating gallery of illustrations from the 1976 Soviet edition of The Hobbit. (via @dixonium)

Copyblogger presents: Five Grammatical Errors that Make You Look Dumb. Please, people: learn the differences between your and you’re, and between they’re, their and there! (via This Is True)

A university library has put together a great parody of the Old Spice ad campaign: Study Like a Scholar, Scholar. (also via This Is True )

New research suggests that misinformed people rarely change their minds when presented with the facts — and often become even more attached to their beliefs. The finding raises questions about a key principle of a strong democracy: that a well-informed electorate is best.

This makes me feel a little less enthused about the next two items:

It’s incredibly cool that we’ve got photos of the Apollo 16 landing site. But that won’t convince people who are absolutely certain that the landings were faked.

And a U.S. Department of Transportation investigation of Toyota crashes blamed on sudden acceleration has implicated driver error in nearly all cases. Of the 75 fatal crashes investigates, only one could be verified as a problem with the vehicle: the Lexus crash last August in which the accelerator was caught on the floor mat, leading to a recall. Of course, the court of popular opinion has already made up its mind… 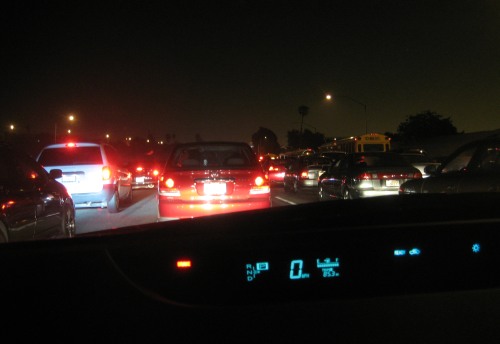 We were driving back from Los Angeles Saturday night around 11:30pm. You might think at that hour traffic would be relatively light. Not so: it was Saturday night, after all, and the route we were taking (101 south to 5 and onward) went straight through Downtown LA. By the time we merged onto the 5 we’d already been delayed by several slowdowns from accidents. It was a bit past midnight when traffic just…stopped.

We waited, figuring it was another round of stop-and-go traffic. And waited. A fire truck quietly worked its way along the right shoulder. After a few minutes, I put the parking brake on.

But the funny part was the driver of the car next to us.

He looked like he was probably around 20, and was driving an SUV with a sunroof. After a few minutes of dead stop, he opened the sun roof — this was midnight, remember — and climbed up on top of his car to see what was going on.

Then he got back down, opened the door, and walked around to the back of his truck so he could get his camera…and his guitar.

Next step: He handed the camera to his friend in the passenger seat, then walked out in the middle of the lane to pose by the car in front of him, giving a double thumbs-up sign and a goofy grin. As far as we could see, he didn’t actually end up playing the guitar.

I expect the photo is probably on Facebook or Myspace by now…somewhere.

All I’ve got are some blurry photos of the dashboard and the cars ahead.

Oh, and the traffic break? Not surprisingly, it turned out to be an accident. Once we started moving again, we passed an area where several lanes were blocked off…and a car was propped up on its side.

Rain! Walked out the door this morning and saw clear blue sky, so I wasn’t convinced… but RAIN! (We seriously need it.) #

*sigh* Google maps informs me that my usual route home is solid red. Rush hour + OMGWTF water from sky! Surface streets it is. #