First of all, Lost has a really annoying tendency to place huge cliffhangers right before the series goes into reruns.

Okay, that out of the way, I have some interesting thoughts about Walt, and the possible significance of his comic book. Spoilers follow: 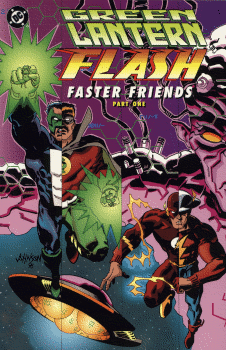 Now that we’ve seen the cover, it’s clearly the Spanish edition of Green Lantern / Flash: Faster Friends* #1 (1997). Now it may be that they chose this book solely because someone noticed a picture of a polar bear in it. On the other hand, there may be a thematic connection with Green Lantern.

Green Lantern’s power is a ring which lets him create things with his mind, limited only by his willpower. In a rather unusual JLA / Sandman crossover, Dream referred to it as a “wishing ring.” Used by a good writer/artist team, this means far more than just creating force field spheres. In fact, the current Green Lantern was an artist in his civilian life, and one of the teams working on the book made an effort to use a different construct every time.

In one storyline (Green Lantern: Circle of Fire, 2001) he faced a villain he believed he had made up when he was younger and drawing his own comic books. He was joined by a group of Green Lanterns who appeared out of nowhere. At the end of the story, he discovered that all of them—the villain, and the other Green Lanterns—had been created by the ring, acting on his subconscious.

Walt, meanwhile, seems to be classic poltergeist material: an ignored child around whom strange things happen…like the bird he was reading about appearing out of nowhere, or the polar bear showing up to chase him. In fact, some people have been saying from very early on that the entire island seems to be responding to the subconscious mind. I wish I could remember where I read it, but someone suggested a parallel to the classic Star Trek episode “Shore Leave,” in which a vacation resort designed to create the perfect experience—based on reading the thoughts of the vacationers—went wrong and started creating, essentially, monsters from the id.

Also interesting is that Green Lantern, like the Flash, is a generational character. Both first appeared in the 1940s, both were completely revamped in the late 1950s, and both were replaced again in the 1980s and 1990s. And while today’s Flash grew up with and trained with his predecessors, the modern Green Lantern had never met his, and was thrust into the legacy unprepared. Not unlike a certain youngster marooned on a (mostly) deserted island with the father he never met.

*I’m sure they would have preferred calling it “Fast Friends,” but they had just used that title for a Flash/GL crossover the previous year.

5 thoughts on “Lost, Green Lantern, and Will”