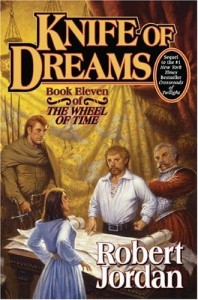 I finally talked myself into reading New Spring, the prequel novel to Robert Jordan’s interminable long-running Wheel of Time series. It’s actually a very interesting character study of young Moiraine, and much more engrossing than the last two books in the series have been—perhaps because I don’t expect it to advance the plot.

Anyway, I’ve spent the last week thinking, “I really ought to see if there’s any news on Book 11.” I finally remembered it when I was in front of a computer, and discovered that Knife of Dreams has just been finished, the cover announced last week, and the book is scheduled to be released on October 11.

I came into the series when Book 8, Path of Daggers was the latest, and Winter’s Heart was released during the year it took me to read the series up to that point. I really liked books 1 (once it got going), 4, and 5, and book 2 still managed to keep me up for hours trying to finish when I really should’ve just gone to bed. The problem is that after book 5, he stopped writing novels, and started writing a novel. A really long one that spans multiple books. (Seriously, how long can he drag out the Faile kidnapping story?)

3 thoughts on “The Wheel Turns”