One of the characters I encountered early in my exploration of Golden Age Flash stories was Ebenezer Jones, the Worry Wart. In fact, All-Flash #24 (1946) was one of those first two GA Flash books I bid on just to see if I could win. The story in that book referred to previous meetings. If it had been the Silver Age, it would have included a helpful editor’s note telling me “See issue #X,” instead of just a recap.

As I kept watching auctions and looking on sites like the Grand Comics Database, I identified at least two more appearances. I finally tracked down the last of the three in March, and was able to write up a bio of the character.

Who is the Worry Wart? In short, he was an ordinary man who had a case of anxiety so bad it was contagious. 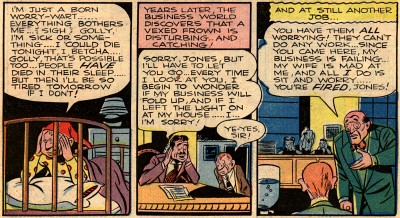 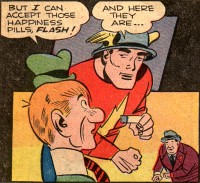 There’s an odd subtext to the character’s stories, though. The reason he returns to Keystone City is that the Flash had previously set him up with a supply of “happiness pills,” which had run out. In Flash Comics #76 (1946), Ebenezer Jones deliberately overdoses on the happiness pills, causing a euphoric delirium just as contagious as his anxiety.

Looking back on this from 2007, it’s hard not to think of it in terms of the vast numbers of people today taking medications for depression or anxiety. Not to mention people who abuse prescription medications. Or just people who abuse drugs. There’s a disturbing drug-dealer vibe in that panel.

It gets better, though. In the Worry Wart’s first appearance, in All-Flash #15 (1944), the Flash makes him a serum to counteract his anxiety:

Yes, that’s right. The Flash gives him a bottle, and he drinks his cares away. No subtext here!