No 3AM evacuations, though we’re several miles away from the danger zone anyway. The Santiago fire we spotted yesterday was stopped before it crossed into suburbia, but judging by the OCFA map it was a near thing. Now it’s burning southeast, into the hills and toward the canyons. Some of which are inhabited. (Yes, there is a rural Orange County.)

We got some pictures of the fallen tree this morning. It managed to rip up a chunk of grass and displace a plastic divider, but it doesn’t seem to have damaged the walkway or stairs.

The winds are still going, which made the drive this morning… interesting. Leaves skittered across the road, swirling in dust devils. Some eucalyptus trees looked like they were bending at at least a 30° angle (and back again). My office turns out to be directly in the path of the smoke plume, which made for an odd view as I drove into it. 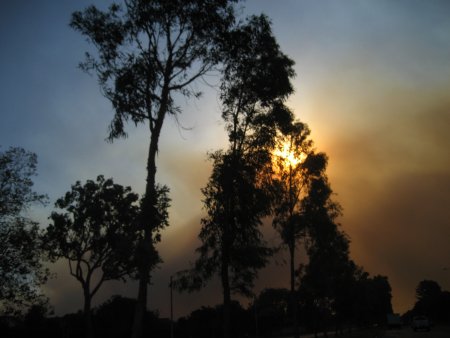 I’ve got some photos of a sepia sky, orange sun, and palm trees with all their leaves on one side, though it looks rather like the photo I posted during the October 2003 fires. 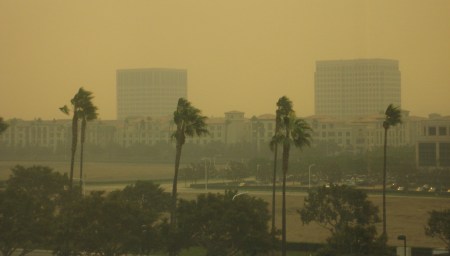 When I got to work, a few ashes were floating to the ground. I’m sure some of them managed to get into the car when I opened the door, which is rather annoying. There didn’t seem to be that many of them on the ground, until I noticed movement on the pavement. The ashes might look light-gray in the air, but they managed to blend in perfectly with the asphalt. That, and the wind seems to have blown most of them up against the curbs, where there’s a solid layer of ash.

The building, normally an off-white color, looked decidedly beige in the orange light. Everything looked faded. Well, almost everything. The iceplant around the parking lot edges looked greener than usual. It makes sense, since it’s normally bluish-green, and the orange-yellow lighting would cancel out the blue. Inside, the smell of smoke has permeated the building.

3 thoughts on “City of Smoke”