In celebration of this milestone, here’s looking back at…

I was a recent college graduate, while Katie was finishing up her last year at UCI. We’d been dating for a little over a year. I’d started working as a web designer just before Y2K, only to be thrust into the role of sysadmin when our previous sysadmin pulled up stakes and moved to the other side of the country. 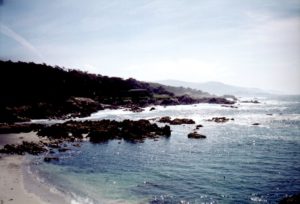 In March, Katie and I took a trip to the San Francisco Bay Area to check out UC Berkeley as a potential grad school and visit San Francisco and Monterey. (I’ve got one photo from that trip online.) In August we went north again to attend a friend’s wedding near Santa Rosa, and a few weeks later, Katie was a bridesmaid in our friends Stacy and Jim’s wedding. 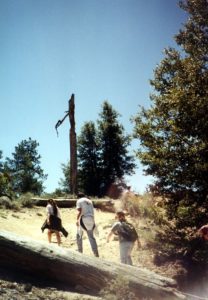 We went camping with UCI’s Campuswide Honors Program that April in the Angeles National Forest (in the mountains north of Los Angeles) — you can check out funny quotes from that trip. We may have hit the Renaissance Faire that spring (we definitely went in 1999 and 2001). In July we went with Katie’s family to the San Diego Zoo, and met up with a bunch of friends at Disneyland in November.

Sometime that summer I went on a company trip to do whitewater rafting on the south fork of the American River. It was a lot of fun…even though I fell out of the raft on a Class III rapid with the cheerful name of Satan’s Cesspool. It happened to be the spot where the rafting company set up their camera, so somewhere I have a series of pictures of our raft heading through the rapid while I lean farther and farther out until all you can see is a hand. (I was fine — I just swallowed some river water and rode the rapid like it was a water slide, and they picked me up when the water calmed down.)

I definitely went to Comic-Con International that summer, and we both went to LosCon in November. That was the year Katie dressed up as a Centauri (Babylon 5), and we have quotes from LosCon as well!

I bought the hyperborea.org domain name in January and had my entire website moved off of the UCI Artslab servers by February. That included Flash: Those Who Ride the Lightning, nearly four years old at the time, and Les Misérables: The Complete Multilingual Libretto…which, after nearly five years online, netted my my first (and so far only) takedown notice just one month after I moved it from .edu to .org. I still think there has to have been a connection.

Meanwhile, Katie moved her website from GeoCities to Xoom…which shortly thereafter became NBCi, then disappeared entirely, and she set up shop on hyperborea.org. 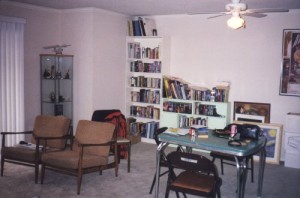 In June, after about a year living with my parents post-graduation, I took my saved-up money and moved into an apartment in Lake Forest, where I never quite finished unpacking. (I never picked up a couch, either, just borrowed chairs.) When Katie graduated, she moved out of student housing and back in with her parents, and I racked up a lot of miles on my car driving back and forth to Downey.

In December, Katie moved into my apartment for a few weeks while she looked for a job, and we looked for a larger apartment. We officially moved in together during the week between Christmas and New Year’s. During a December heat wave, naturally.

Update (August 2009): I’ve been cleaning up the Twitter digests, and ended up just deleting some that were redundant. So technically, this is no longer the 2,000th item in the archive, though it was at the time it was posted.