Scientists have built a computer model of the Neanderthal vocal tract based on fossils, and have simulated the kinds of sounds they could have produced. Ever since I read Robert J. Sawyer’s Neanderthal Parallax novels, I’ve been fascinated by the idea that there were two distinct human species, living side by side, for perhaps thousands of years. What happened to them? Did our ancestors kill them off, or interbreed with them? Did they fail to adapt to a changing climate? (via Slashdot)

On a related note, it seems that Expelled, the anti-science propaganda film that actually invokes Godwin’s Law by claiming that “believing” evolution leads to Nazis, opens this weekend. I’m curious to see how badly they misrepresent things (it’s always best to look for yourself, instead of just taking other people at their word—that’s the whole idea behind science, after all), but I can’t bring myself to support them by actually giving them money. Meanwhile, Expelled Exposed is interesting reading.

Somewhat(!) less controversial, InformationWeek reports that Windows XP SP3 may be out as soon as next week. This reminds me: I really should look up some reviews of Vista SP1 and see if it’s improved matters any.

Still in software, dria.org explains why the AwesomeBar is awesome. That’s the nickname given to the new address bar in Firefox 3, which lets you search your browser history as you type. It’s the reason I never went back to Firefox 2 after trying out one of the later FX3 betas, and why I’ve installed Fx3b5 on two more machines. The Opera 9.5 previews have a similar feature, but Firefox’s implementation is better visually. It’s easier to spot the page you want, and over time, it learns which pages you visit more often. It’s so much faster to type a word or two than to hunt through the bookmarks menu. (via Asa Dotzler)

[Edit] I forgot to include IEEE’s article on how copyright law applies to websites, What Can You (Legally) Take From the Web?

Finally, ***Dave relates an incredibly cool story of going to see Avenue Q and what happened after the show. I had no idea that (at least in New York), the “Give Me Your Money” segment was actually collecting for a charity.

We made it to San Diego after a longer than expected midday drive. (Traffic between Carlsbad and the San Diego city limits was a nightmare.) After checking into the hotel, we stopped for a snack and then headed out to the convention center to pick up our badges for Comic-Con. It went a lot more smoothly than last year, probably due to actually having confirmation notices. (Though I did end up having to run around looking for the press desk for the CBR gig.)

One note: For the first time in four years, we were actually asked to show our trolley tickets. You have been warned. 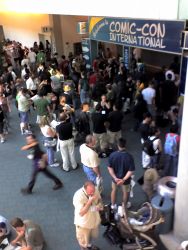 We had tickets to see Avenue Q tonight, so instead of staying for Preview Night with everyone else (and there were lots of people waiting to get in at the time we left, about half an hour before the doors opened at 6), we went to dinner at Dussini, the Mediterranean restaurant that replaced the Spaghetti Factory a couple of years ago.

Then we walked over to the Spreckels Theater, which was interesting. It’s inside an office building, and you get from the lobby to the balcony by taking the regular office elevators to the third floor. Then they check your tickets.

Tomorrow we go to the con proper, and my con report should appear at Comics Should Be Good.

So, did anyone else have the song “Mix Tape” pop into their heads in connection with tonight’s Lost?

Incidentally, on the question that so vexed Hurley and Charlie—namely, who would win in a race, the Flash or Superman… it’s the Flash. That’s not just a fan reaction, I have documented evidence.