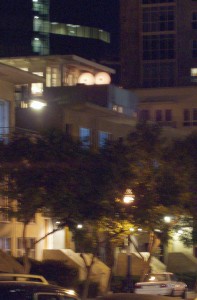 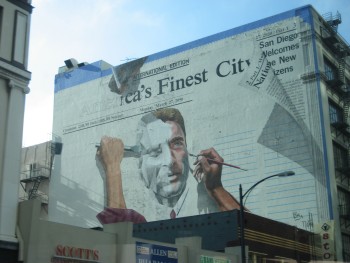 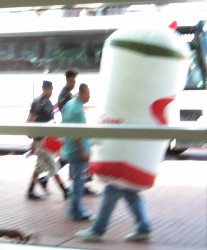 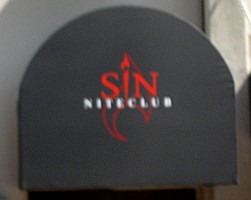 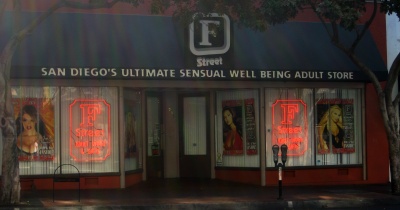 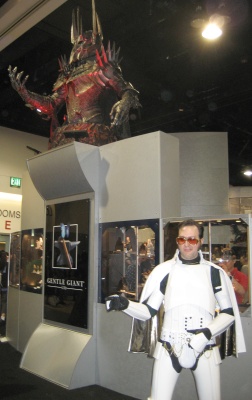 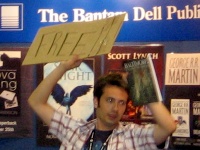 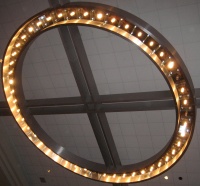 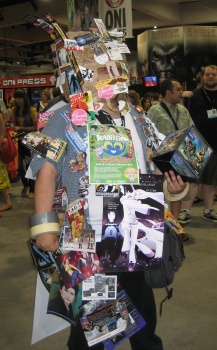 Yes, we found both Waldo and Carmen Sandiego—twice! We didn’t even need a GPS! (And who would have guessed that she’d be in San Diego?)

Now if we’d only found them together…

Edit: a CBR forums thread pointed me to this piece of fan art that simply must be seen!

Some random thoughts and anecdotes about Comic-Con that didn’t make it into other posts:

It’s amazing that out of (reportedly) 140,000 people, you’re virtually guaranteed to run into people you know. For instance, I knew in person 8 people besides the two of us who were definitely going to the convention. Without planning, I ran into 6 of them, as well as 2 people who I didn’t know were attending. Katie and I even accidentally ran into each other once. I’m sure I ran into people I’ve met online, but just didn’t recognize them on sight.

Overheard near a coffee shop one morning in San Diego:

Nothing as drastic as Aeire’s story of nearly getting trampled, but I sustained a number of minor injuries over the course of the event: 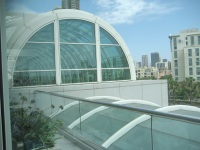 I walked out onto this balcony Friday afternoon and took some pictures looking out across the street. At the time, there were some teenage girls sitting on that ledge off to the left. It’s maybe 4 feet deep, and some of them had scooted out past the balcony, one of them standing up. When I came back later to get a picture of the ledge (how creepy would I have looked taking a picture of a group of teenage girls?), the door to the balcony was locked. I’m guessing security wasn’t happy.

When eating out at a restaurant, ask about the portion sizes before you order. The food at Bandar was very good, but we were each served enough food for three people. With no refrigerator or microwave in our hotel room, we couldn’t save the leftovers. The waste was saddening. 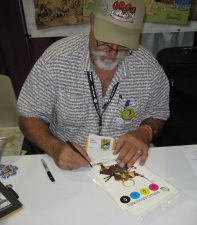 Wednesday morning before we left for San Diego, I made a last-minute addition to my small stack of stuff to get signed: Sergio Aragonés’ issue of Solo. During my first half-hour at Comic-Con on Thursday, I found myself at the Groo booth, face to face with the artist. When I asked him to sign it, he asked me whether I’d had a chance to read it yet. (I guess with the Groo 25th anniversary and drawing the cover of the con schedule, people were tracking down his stuff?) I told him I’d read it when it first came out. (I posted about the story “Heroes” on St. Patrick’s Day.)

I dropped by the Studio Foglio booth a couple of times, with the intent to get my latest Girl Genius trade signed. (It arrived in the mail earlier that week. How could I pass it up?) After collecting the individual issues to start with, I ended up buying the first two or three books direct from the source at Comic-Con a few years ago, and Phil Foglio was kind enough to sign the whole set as he sold them to me. So as the newer books have come out, I’ve brought them to cons to get them signed.

This year I managed to find Phil Foglio on Friday. He was talking with someone about site issues (which I assumed were about last month’s downtime), and apparently it’s banned in China as being “too racy.” His assistant encouraged me to just interrupt, and I got him to sign volume 6. I made sure I linked to them in that night’s con report, without realizing that the site had gone down that morning due to bandwidth issues. *sigh* Of course I took the book out of my backpack that night… but on Sunday, I wandered by the booth again, and this time Kaja Foglio was there. If I’d still had it, I could have had both of their signatures. Again, *sigh*. We talked for a bit about the switch from pamphlet-to-book to web-to-book, and about some of the T-shirt designs, and about how far ahead they had story material (years).

I also kept looking for Joshua Middleton, since I wanted to get his All-Flash cover signed and show him the wallpaper I made for my cell phone, but I never saw him any of the times I went into Artists’ Alley. His table was there, but he wasn’t, and all I could think of was walking past his table at Wizard World LA back in March. Not that I had anything to get signed at the time, but still…

Of course there are always tons of booths run by small press trying to promote their works. The only one that stands out in my memory is Alcatraz High by Bobby Rubio. I talked with him, he showed me a preview issue which was funny, and I bought the first issue of the comic (figuring I’d get the next two if I liked that one), which he signed with a sketch. Unfortunately, this being several days into the con, my brain had turned to mush and I didn’t think to ask whether the story I had read was actually in #1.