So what do you think… 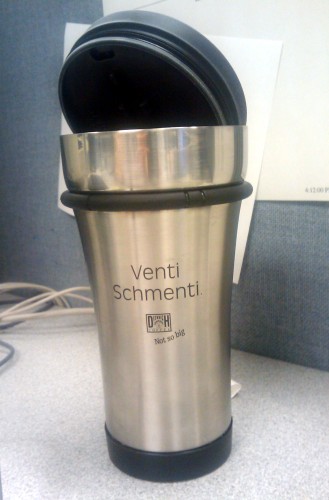 Would it be a bad idea to bring this travel mug to Starbucks? #

(Completely unrelated: The sound of gardening tools outside the office is blending with the computer fans for really weird harmonics. #)

Update 2015: Now the website doesn’t even exist anymore. Diedrich.com redirects to a page on Keurig’s online store. But Martin Diedrich took over the old location two months after I posted this, and Kéan Coffee is still going strong six years later!

On another note, saw a great misspelling in search terms: “synapses” for “synopsis” #

A couple of years ago, Starbucks bought all 30 or so company-owned Diedrich Coffee stores.  There were a couple of franchise locations left (well, kiosks, really) in Orange County, and one of the Texas stores, but that was it.  Most of them were converted or shut down, with only two keeping the Diedrich name and menu (both in Irvine, oddly enough).  The one across from UCI eventually got converted.

The Diedrich nearest where we live was always busy.  After it had been assimilated, though, we never saw it full.  People didn’t go there just because of the location, they went there because it was a Diedrich.

Now it’s on the list of stores that Starbucks is closing, along with a newer one that opened about a quarter-mile away.  (They haven’t updated the web page yet, but it’s on the PDF.)

In essence, Starbucks bought an (apparently) successful business and ran it into the ground.  I really hate when that happens.

Obviously the place, when it was a Diedrich, wasn’t taking money that would have gone to Starbucks, since their customers didn’t stick around when it was converted.  And the one store that does still have the Diedrich name and menu always has customers whenever I end up in the area — so it’s not just people avoiding the parent company. It’s people who don’t like the Starbucks coffee and atmosphere.  (And possibly the name.)

I have to wonder how that other store would have done if they’d kept it intact instead of homogenizing it.

Update: Martin Diedrich picked up the empty storefront after Starbucks left, and opened his second Kéan Coffee in March 2009. Once again, it’s always busy. Funny, that!