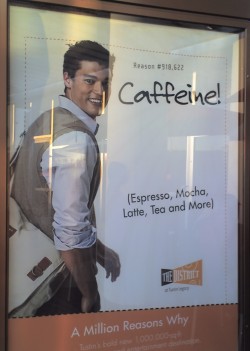 The new shopping center, The District (built on a corner of the former MCAS Tustin base), has an ad campaign with the slogan, “A million reasons why.” Each poster shows someone posing with a random number and something that can be found, done, or resolved by going there.

Here’s a guy who has his priorities straight. They’ve got Peet’s, Seattle’s Best Coffee, there’s a coffee bar in the Whole Foods, and who knows how many more restaurants that serve it.

Of course, if he wanted more choices, he’d be better off going to the Irvine Spectrum. They’ve got a Coffee Bean, a Kelly’s, 2 Starbucks (and a third on the way), and a Nordstrom Espresso Bar. And once upon a time, they had a Diedrich…

Speaking of Diedrich, the one on Culver and Barranca is still around at least through next summer. I haven’t been by the one near UCI lately, but I seem to recall hearing October, so it may not be long for this world.

Hmm, you know what? That poster lists a lot of caffeine sources, but it doesn’t say anything about coffee. With luck they won’t be too confused if you just order a coffee, as in this strip from Real Life Comics. 😀

One thought on “Priorities: Caffeine!”