My feed reader is filling up with commentary on Microsoft’s proposal to lock web pages to specific rendering engines (funny how it doesn’t sound quite so forward thinking when you put it like that). Rather than link to a lot of them, I’ll just link to Opera Watch’s post which collects quotes from various standards & browser people.

Also interesting: last week we got our first visit from Internet Explorer 8. Just one visit to Katie’s analysis of Wolfram & Hart’s work comp liability, but it loaded the relevant images, styles, etc., so it looks like an actual browser visit (and not some bot using a fake UA, like the spambot that keeps trying to post comments as Firefox 9). More importantly, it actually came from an IP address that’s assigned to Microsoft and resolves to a microsoft.com hostname, so I think it’s the real deal.

Okay, this will mean nothing to most people out there, but to web developers, particularly those who use standards-based design to maximize compatibility with different browsers, this is monumental.

An internal build of Internet Explorer 8 has passed Acid2.

The Acid2 test was released in April 2005 to test a number of pieces of the HTML and CSS standards that, at the time, no modern browser handled according to spec. The purpose of the test was to prod browser developers into improving their products, and to do so consistently, so that developers would have more tools available for cross-browser sites.

At the time, Microsoft dismissed its its importance entirely. Even though they were working on rendering improvements for IE7, they stated that Acid2 was not one of their goals. Meanwhile Opera and Firefox were both in the wrong phase of their development cycles to make sweeping changes, so Safari jumped on it and became the first browser to pass. (Every once in a while I see someone say Opera was the first, and I have to wonder where they were.) Opera followed with version 9, and the Firefox 3 betas pass it as well.

With Gecko (Firefox), WebKit (Safari), Opera and IE accounting for the four biggest web browsers and the most popular minor browsers (Flock, Camino, Shiira, etc., plus IE shells like Maxthon), this shows unprecedented convergence among clients. It will be much easier to develop a cross-browser website that runs on IE8, Firefox 3, Opera 9+ and Safari 3+.

There are, of course, many aspects of the specs that aren’t covered by Acid2. And there are emerging standards like HTML5 and CSS3. And there are plenty of other bugs, quirks, and extensions among various browsers (IE’s bizarre concept of having layout, for instance, trips up all kinds of weird issues). And then there’s waiting for IE8 to be released, and moving people up from IE7, not to mention all the people we still have to move up from IE6. Full benefit is probably at least 3 or 4 years away. *sigh*

Open Standards, One Web, and Opera – Just why are standards important, anyway? (via Opera Watch)

Speaking of Opera, their EU antitrust complaint against Microsoft has been making waves. Responses at CSS3.info, Web Standards Project, Slashdot (edit: more Slashdot), Asa Dotzler, Opera Watch, plus a Q&A w/ Haarvard. My take: Good luck on unbundling, but if they can force Microsoft to catch up with the rest of the market in terms of standards support, I’m all for it.

Nissan vs. Nissan. On my way to work I saw a bumper sticker on an XTerra that said “In support of our freedom, it’s my last Nissan.” Huh? There was clearly a web address below it, but it was too small to read at that distance. So I looked up the phrase, and apparently there’s been a long-running dispute over the domain name nissan.com, between a small computer business named after its founder, Uzi Nissan, and the Nissan car company. The dispute was eventually resolved (correctly, IMO, since he has a legit reason to use the name) in favor of the little guy. On the other hand, I don’t see why the site makes such a big deal about Nissan’s “French Connection” to Renault. 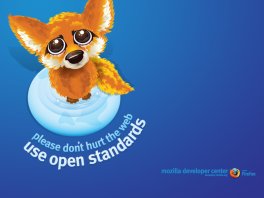 Here’s a surprise: web standardista extraordinaire Molly Holzschlag is now working with Microsoft to promote web standards within the organization.

Improving interoperability, especially at high-profile services like many of Microsoft’s, is critical to the future of the web. I can only hope that the emphasis on standards will feed into the design goals for Internet Explorer 8—and that IE8 will be released before Windows XP drops from mainstream to extended support in 2009.