WTF? eBay says I can’t charge more than $3 to ship an item in the DVD category. I’m selling a 2-pound boxed set. The cheapest USPS rate is $3.16 for media mail. I appreciate the effort to prevent sellers from overcharging for shipping, and $3 leaves plenty of room for most DVDs…but apparently it hasn’t occurred to them that people might be selling larger boxed sets. 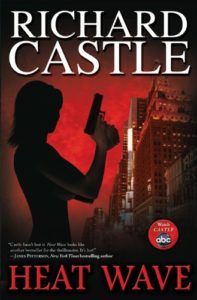 Hah! It turns out those ads for Heat Wave during Castle aren’t fake: ABC actually had someone write the Nikki Heat book as a tie-in.

The first time I remember seeing something like this was with (appropriately enough) Murder She Wrote, with a paperback mystery novel credited to Jessica Fletcher. In that case, though, the show had been on for years and was a television staple. DC Comics got into it in 1997 with The Life Story of the Flash, credited to Iris (West) Allen, which had previously been referenced in the comic books.

More recently, Lost had an in-universe book published in the real world: Bad Twin was billed as the final novel by one of the passengers on Oceanic 815 who didn’t make it through the first episode. I actually read that one. It was interesting enough, though it had little to do with the show beyond the presence of the Widmores. 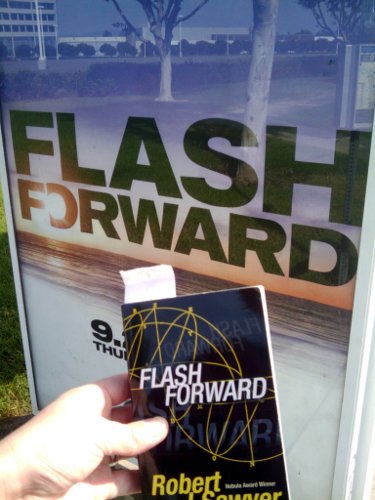 It’s been interesting to look at both where the TV series diverges from the book: the setting, the time scale, recordings, and in most cases the cast — and where it tracks: the concept, the impact of the worldwide blackout on people now, the way different people approach their foreknowledge, a main character investigating his own murder, and the way the viewpoint organization just pulls together to take point on investigating the incident.

And every once in a while, a specific conversation is adapted. Demetri’s “You’re going to be murdered” phone call from Hong Kong and Theo’s phone call from South Africa are very similar. And there’s a discussion on the likelihood of an event hitting exactly on the hour that was practically lifted for episode two.

I doubt the TV show will tackle the question of whether the universe exists without observers (sort of “If a tree falls and no one is there to hear it, does it make any sound?” taken to the extreme) or the long-term implications of life extension. And somehow I doubt the Large Hadron Collider and search for the Higgs boson are involved (though I noticed the TV show’s Lloyd Simcoe works at Stanford, which does have their own particle accelerator).

It’ll be interesting to see where they go with this.

Entirely separate from the TV show, it’s also been interesting to look at the book’s predictions for the present day. Most of it takes place in 2009, but it was published 10 years ago. I list a few items — like getting the Pope’s name right, but missing the explosion of cell phones — in my review of the book from when I read it last year.

Then there’s the suggestion made that one could prove the future can be changed by demolishing some major landmark that many people saw in their visions, but “I don’t suppose the National Park Service is going to let us do that.” In my head, I imagined a deadpan voice saying, “You can’t blow up a national monument.” Hmm, I doubt the cause of the blackouts in the TV show will be robots from space. 😉

After finishing season one of Leverage on Netflix, we’ve started watching season two on TNT’s website. Netflix’s streaming video has been great, and TNT’s has been decent enough aside from dropping out of full-screen for commercials…until yesterday.

Last night, while watching “The Order 23 Job” on our MacBook, we got to the final commercial break — and TNT popped up an error saying that the content required Windows to play. The episode played fine. Previous commercials played fine. But this one? The DRM wasn’t compatible with the player on the Mac.

Yeah. The DRM for the commercial wasn’t compatible.

It wouldn’t have been so bad if TNT approached it the way Hulu does when a commercial fails to play, which is to blank the screen for the duration of the ad (typically 30 seconds) and admonish you for not watching the commercials. Unfortunately, the episode didn’t pick up again.

As near as I can tell, the player was set up to continue the episode when the ad finished, and didn’t account for the possibility that the ad might not play. To make matters worse, the scene selection thumbnails don’t work right in Safari, so we couldn’t jump straight to the final act.

Because neither of us wanted to spend a lot of time troubleshooting, we just went into another room and brought up the Windows box to finish the episode. I suspect the scene selection would have worked in Firefox on the Mac, but haven’t tested it yet. I did go back later to see where I could report the problem to TNT, but the wording in their FAQ suggests to me that they’ll just ignore any reports of Mac problems.

I don’t mind watching reasonable ads to get a free service, but if the ad breaks, it shouldn’t take the actual service down with it. You don’t kick people out of a movie theater because the previews didn’t play, and you don’t send them home part way through an event because one of the sponsors’ banners fell down.