I saw quite a few Flash T-shirts in San Diego this year (more than I’m used to seeing at Comic-Con, actually), but only two people dressed as the Flash. Interestingly, both were women. 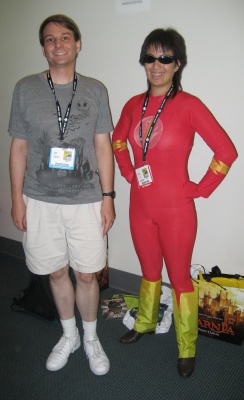 While all four of the major Flashes have been men, DC has published a number of female speedsters, including several alternate-reality Flashes and two who have worn the Flash symbol in-continuity: Lady Flash and Jesse Quick.

I also found it interesting that both costume designs incorporated sunglasses, reminiscent of one of Jesse’s later costumes and of the Kingdom Come version of Iris West II.

Update August 3: Wallyoeste and West both pointed out CBR’s 3rd Photo Parade, which includes two pictures of a couple in Flash costumes. Part 4 has a picture of a DC group with a fifth. This brings it up to at least 5 Flashes at the convention: 3 women and 2 men.

4 thoughts on “Flash Sightings at Comic-Con”