With the winds dying down, the smoke from the Santiago Fire clung loosely to the mountains most of the day. Unfortunately, smoke from the new fires down on Camp Pendleton drifted up the coast to take its place, bringing back the yellowish sunlight. Also, without the wind to clear them away, ashes left a thorough coating on anything outside. Work was somewhat calmer, with everyone (and their houses) finally accounted for. Power kept flickering throughout the afternoon, though. Between 4:30 and 5:00, something massive flared up, sending a new plume of smoke into the sky. 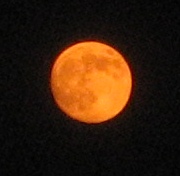 I ended up leaving the office after dark, giving me a chance to take some pictures of the orange moon (it was actually a bit past first quarter on Sunday, and it’s not quite full today*).

I also went looking for spots to take pictures of the red glow coming from the mountains. There’s a bridge near the office where I frequently take pictures of the hills, and I managed to find a spot where I could set up my mini-tripod and still have a view of the glow. There was one brighter patch which seemed to be changing shape, which I figured might actually be flames. 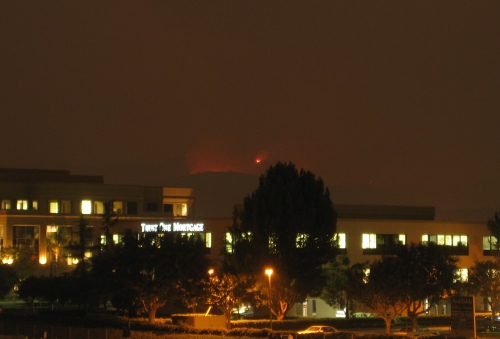 Afterward, I drove up to a cul-de-sac on Quail Hill which I’d discovered at lunch. I just parked my car at the end of the road, put the camera on top of it, and started trying shutter speeds. 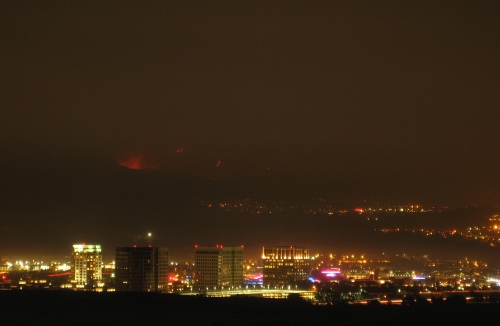 The vantage point gave me a better sense of geography. The Irvine Spectrum area lies in the foreground, with the 4 tall office buildings (the two in the middle are under construction) and the bright neon proclaiming the movie theater. The shopping center stretches off to the right. The empty area behind them consists of undeveloped land from the former El Toro Marine Base and the hills that burned earlier this week. The clusters of lights about 1/3 of the way up are, I think, Foothill Ranch. That places the glowing area in Santiago Canyon.

Even though some of the houses up on Quail Hill seemed to still be under construction, they had an efficient neighborhood watch going. I must have been there only 3 minutes before a van pulled up into a nearby space. A guy stepped out. No labels, no uniform. I said something along the lines of, “Hello, I’m taking pictures of the glow from Saddleback.” He said, “It’s still going, huh?” “Yeah.” I muttered something about exposure times, and he got back into his van and drove off.

*Strangely, I just discovered that my Nightmare Before Christmas calendar has the phases of the moon shifted… well, out of phase. It lists a new moon for Friday instead of a full moon. Everything else is consistent with this placement. Except reality.