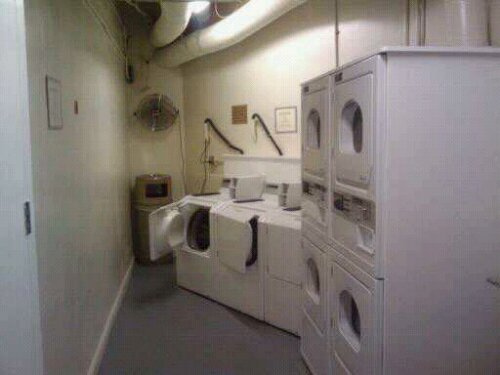 So, we didn’t make it to WonderCon today. We got out later than planned, and ended up hitting rush hour traffic in San Jose, which cleared up after a while, but dropped back to parking lot status as we approached Downtown San Francisco. By then it was raining pretty steadily as well.

Then I made the mistake of relying on Google Maps for directions to the hotel. One way streets, poorly labeled streets, streets where cars have to share with cable cars, trolleys and pedestrians… We missed our turn at one point & had to go around a few blocks to get back on track, then got stuck on Market Street where we could only move one carlength at a time.

Somewhere in all this, I drove over a bump. I didn’t think anything of it, since the car wasn’t moving fast enough to notice any change in how it handled. The low tire pressure light came on, but I see that in cold weather sometimes. It was only after we’d reached the hotel (on the left side of a one-way street) — and been handed a flyer with directions to the parking entrance — that someone in another car told us that the front right tire was flat.

END_OF_DOCUMENT_TOKEN_TO_BE_REPLACED

Does it really accomplish anything to turn on your hazard lights when you stop your car in a no-parking zone for loading and unloading? It seems like it would have all the legal force of crossing your fingers on the witness stand.

What genius decided dark green on black was a good way to mark up parking spaces? To make matters worse, some of the spaces actually are 20-minute spaces…only they’re labeled on the ground, in the same color green paint. I was almost into the space before I noticed.

Judging by the commercial, Ford’s hybrids are hippier than the Prius. And I say this as the happy owner of a Prius. Seriously…the size of a tree indicates energy efficiency? The Prius has a bar graph.