Last week, Mark Evanier wrote about media coverage of Comic-Con that exaggerated the number of people in costume.

I think it was Saturday afternoon that I noticed a huge cluster of people in really good hall costumes, all ringing the G4 TV booth. I noticed the words, “For the next two hours…” scrolling by on the teleprompter, and realized they were probably trying to film an intro to their con report with all the cosplayers in the background.

No wonder people get the impression that everyone dresses up!

For the record: Katie dressed as a pirate on Saturday. Ironically, she got more attention for the Serenity T-shirt she wore on Friday. I just wore a T-shirt and shorts all four days. 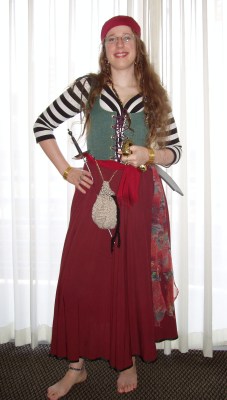 Sunday at SDCC was, oddly, more crowded than Saturday. Maybe it was the desperation of the last day combined with the fact that it was still on the weekend. We got in later, closer to 11:30, since we spent the morning packing.

I did a final round of back-issue hunting, and ended up not buying anything. All the Golden Age Flash books were high-grade, and therefore out of my price range. Unfortunately I forgot to check eBay this morning, because several auctions I’d put off bidding on ended before we got home.

I hit two panels: First Fables, which was basically the entire creative team of the book and the spinoff, Jack of Fables, and was great fun. They also announced the upcoming “burning questions” issue. They’ll take questions from readers, and put together a bunch of one– or two-page stories to answer them.

The other panel was for Lord of the Rings. People from New Line Home Video, EA Games, Games Workshop, and Topps Cards all talked about their new tie-ins. At least, they did after the 15-minute attempt to get the screen properly hooked up to both the DVD player and the laptop. I’m annoyed that they’re releasing another DVD edition (this set has the theatrical version and the extended version on one double-sided disc—no, they’re not making more changes to the films, thank the Eldar), but the Battle for Middle Earth II expansion pack, Rise of the Witch-King, looks pretty cool. Too bad I’m not any good at real-time strategy games.

We left the con around 4:00, had dinner back in Little Italy, then got on the road around a quarter to six. 2½ hours later, we were home.

It’s odd how quickly you get used to the walking. After the first day, my feet were sore from walking and my shoulders were sore from carrying my backpack. They were still bad the next morning, but better by evening, and by the third day, they were perfectly fine. (Well, except for the blister on my toe.)

Still, I think I’m going to be a zombie at work tomorrow. Next year, it might be worth taking the following Monday off as well.

Anyway, stay tuned. I’ll be posting photos (cosplay, weirdness, and possibly sightseeing)—and with any luck, quotes as well—sometime in the next few days.

Neither of us spent more than an hour or so on the floor on Saturday, in part out of self-defense. Comic-Con is usually the most crowded on Saturdays, though we didn’t see much difference from Friday this year.

After the Flash panel, I went back to my back issue hunt. Found quite a few in the $150-500 range. Unfortunately I’m looking in the $50-100 range. Dealers just haven’t brought their low-grade Golden Age books, so it looks like it’ll be back to eBay.

Quick Draw was, as promised, lots of fun. I missed the first 20 minutes or so (I’d been planning to go to the One Year Later panel, but changed my mind at the last minute—no regrets there!), but Katie caught the whole thing. Sergio Aragonés, Scott Shaw!, and Kyle Baker were directed by Mark Evanier to draw ever crazier things, sometimes competing to convey a “secret word” in a Pictionary-style game.

The Narnia/Pirates panel, expected to be the highlight of the day, turned out to be a big disappointment. Last year, the Narnia presentation was fascinating, despite the delay from the satellite link-up, because things were completely new, and because the people involved knew what fans were interested in seeing. This time they basically sent the marketing guy out to talk about the special edition DVD.

As for Pirates of the Caribbean… the talk by John Knoll was a fascinating insight into the technology that they used to animate Davy Jones, but the first half was out of place at a Comic-Con. It would have done much better with a highly technical audience—maybe at a Cal Tech Seminar Day or something. Once he started showing the before-and-after shots, and the test footage, the audience warmed up to him. And some of the joke footage, like the giant Krispy Kreme donut rolling out into the surf, or Elizabeth Swann cutting a swath through the Dutchman’s crew with a pair of lightsabers, was great.

After that fiasco, we decided to clear out instead of staying for the Spider-Man panel. Neither of us had anything we were looking at for the rest of the afternoon, so we decided to go out to see the Star of India (the ship, not the restaurant) and the other ships out by the bay. Among other things, Katie wanted to get some pictures while still in her pirate costume. Unfortunately it took us so long to get around the insanely long line for Spider-Man—which was a big surprise, since we’d just walked into the hall earlier—that we missed our trolley. Literally, we were up to the gate on the opposite side of the tracks when it pulled away. We ended up postponing our dinner reservations to make sure we had enough time.

As it turned out, the Star of India itself was closed, but the HMS Surprise (used for filming Master and Commander) was open, along with the HMS Berkeley, a ferry, and a pleasure boat called the Medea. The Berkeley had mostly been turned into the Maritime Museum, but the engine rooms were open for view. We skipped the Soviet submarine. Bulky costumes and full backpacks don’t go well in confined spaces. 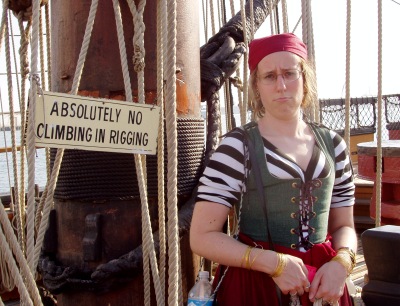 We had enough time to drop stuff off at our hotel room and lie down for a few minutes, then went back to the Gaslamp district and dinner at Dussini, a Mediterranean place that replaced the old Spaghetti Factory. Once again, a great restaurant. We also saw a great demonstration of why you should make reservations: The walk-in couple in front of us had a 45-minute wait. We were shown to our table immediately. 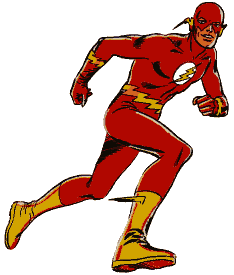 I missed the first half of Saturday’s “50 Years of the Flash” panel because we missed the red line and got stuck waiting to transfer at America Plaza. The shuttle might have gotten us there faster (maybe even on time), but we were pretty sure they wouldn’t let us on with our coffee.

What I did see of the panel was still mostly retrospective, and mainly Mark Waid, Geoff Johns, and Danny Bilson. Carmine Infantino told a couple of stories (one of which he’d told at Thursday’s panel, about the “war” between him and Julius Schwartz: he’d try to draw ever-more-nasty cliffhangers on his covers, and every time, Julie would come up with a story to go with it. So finally he drew one with the Flash and the Golden Age Flash both racing to save some guy, and said, “There! Top that!” The rest, of course, is history).

After a while they started talking about the new Flash book. While the most common answer in the Q&A session was, “Wait and see,” Bilson and DeMeo did answer a couple of questions that I’ve seen people asking about.

For the “legacy pages” in the first two issues, they did a whole bunch of research, sometimes finding conflicting info. (They didn’t mention this one, but the issue of “Who named Impulse” is probably one of those cases.) Any changes in continuity are accidental, and not intentional.

The reason Bart’s acting so morose in these first few issues is that he’s got this problem to deal with, and once he starts to work through it, his impulsive nature will start taking over again.

I almost got the new #1 signed, but staff kept telling everyone to clear the room, and as near as I can tell, Bilson and DeMeo took a different exit than I did.

Update: I forgot to mention some of the other stories. There was a good one Bilson and DeMeo told about how when they pitched the TV show, the powers that be wanted the Flash to be running around in a gray sweat suit. So they got Dave Stevens to design a suit and his rendering convinced them to go with it. Even then, the network resisted bringing costumed villains in until they showed it could work. And apparently what killed it wasn’t bad ratings, but network politics. Someone wanted his show, so he could get a better bonus. A real pity, as the second season opener would have been a two-hour special with the Trickster, Captain Cold, and Mirror Master—a Rogues Gallery episode.

Update 2: Adding more stuff as I remember it (and have time to type). END_OF_DOCUMENT_TOKEN_TO_BE_REPLACED

I spent more time walking around outside today, so I did get to fry a bit. (Not too much, fortunately.) Oddly enough, one of the first hall costumes I saw on Friday was Thor.

Caught the Stardust preview. It looks very promising. Neil Gaiman and Charles Vess were there, of course, plus screenwriter Jane Goldman and one of the producers. The director wasn’t there, because he was on set, filming, but they showed a few clips of “very raw” footage which was actually quite good. (And yes, they do want Tori Amos as the tree, if they manage to film the scene.)

The secret to visiting Ghirardelli’s seems to be to go at off-peak hours. We dropped in mid-afternoon, after the Stardust panel, and there were only about three people in line in front of us. Usually we go after dinner, when the main floor and panels are closed, and about half the con attendees are filling up the Gaslamp District, and they all seem to want chocolate ice cream. Of course, it being Friday may have something to do with it as well, though it was definitely more crowded than yesterday.

I was walking past the Keenspot booth, and noticed a drawing of Kestrel from Queen of Wands. Sure enough, Aeire was there. I told her I was a fan of the comic, and asked her whether she had any new projects in the works. She said she had two, one of which is a QoW sequel with Angela, that she’s working on between real life and work. (She wouldn’t say anything about the other one.)

Power of the Dark Crystal is way too early to get any sense of how it’s shaping up, but the people involved seem to be really into it. And they’ve got Brian Froud, who did the designs for the original. (The director and the lead effects guy both said one of the first things they asked when approached for the film was, “Is Brian Froud doing it?”)

We met up with our friend Wayne after the Dark Crystal panel, and went out to dinner at Masala, a new Indian restaurant on 5th Street. It appears to have replaced Octopus Garden, since it’s next to Rockin’ Baja Lobster, but looking at that photo, I’m not 100% certain it’s the same building. Anyway, great food once again.