Here’s our first view of the island of Hawai‘i, as our plane approached on Sunday morning, April 3. Snow-capped Mauna Kea is rising out of the clouds, with Mauna Loa behind it.

A week later, we spent Sunday evening waiting for our flight out of Kona Airport. (After a disastrous experience at LAX in which we arrived 2 hours ahead and got to the gate with maybe 15 minutes to spare, we showed up early for the flight home. But Kona’s much smaller and better organized, so it took us maybe 15 minutes to check in. There wasn’t even a line to go through security!) 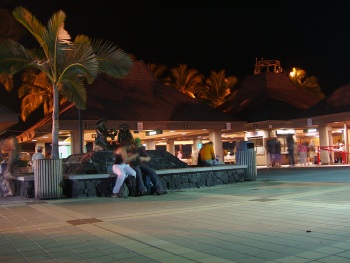 I hope you’ve enjoyed this series on our Hawaiian vacation. I’m sorry it took so long to finish it, but hey, I managed (just barely) to beat the 6-month marker!

There was one morning in Hawai‘i that the clouds in Kona cleared and we could actually see something of Hualalai, the volcano that makes up the western side of the island and on whose slopes we were staying. Here’s the view from our hotel room balcony. 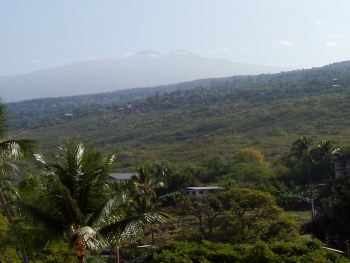 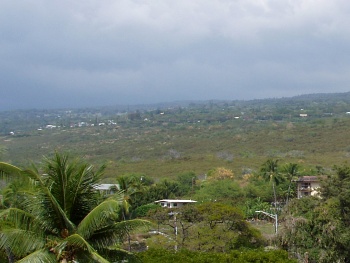 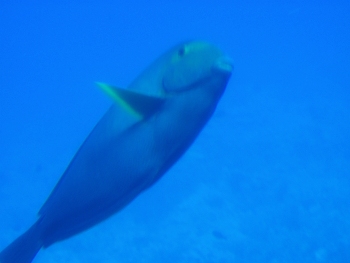 It didn’t look nearly so blue to us, of course, since our eyes were adjusted to it. END_OF_DOCUMENT_TOKEN_TO_BE_REPLACED

When we arrived in Hawaii, I posted this photo taken from our hotel room balcony: 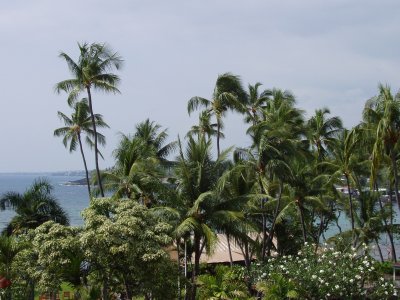 What I didn’t mention was that that shot was carefully cropped. The view really looked like this: 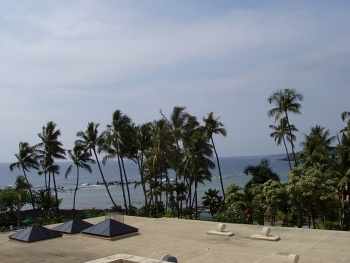 Well, hey, we got the cheap rooms, so you kind of expect that. Still, there was a lot to see right on the hotel grounds. First of all, we stayed at the Outrigger Keauhou Beach Resort south of Kailua-Kona. Outrigger had recently taken over the hotel, and they were in the midst of remodeling. They had to block off part of the parking lot for a couple of days in order to bring in a crane and replace the air conditioner. So I expect any review of the facilities themselves is going to be outdated within a couple of months.

The hotel grounds include a couple of heiau ruins, some tide pools, and a small garden area. END_OF_DOCUMENT_TOKEN_TO_BE_REPLACED 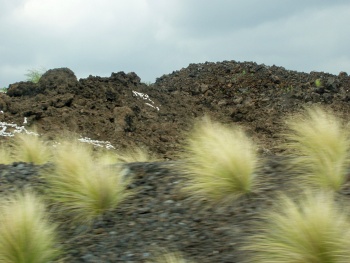 Here’s a view of the coast itself. END_OF_DOCUMENT_TOKEN_TO_BE_REPLACED