After almost 1½ years, my Golden-Age back-issue hunt finally netted a relatively cheap copy of All-Flash #12, the first appearance of the Flash villain, the Thinker. It’s an odd read, because the origin of the Thinker (a mob boss who plans his heists very meticulously) is interwoven with a slapstick story of the Three Dimwits. 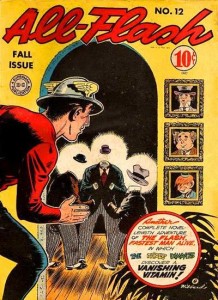 The Thinker story is played more or less as a straight super-hero vs. organized crime story. I’d summarize it, but the Comics Archive has already written it up in their article on the Thinker. Now, imagine the first five paragraphs over there interwoven with a Three Stooges film and you’ll get the idea. The Dimwits end up buying a restaurant heavily in debt to the mob, and accidentally make salads out of an alien plant that make people turn invisible.

It’s incredibly silly, but it ties into the other half of the story: The original mob boss’ henchmen are caught robbing the Dimwits’ restaurant, so he calls in the Thinker to solve his problem before they can rat on him. And of course, once the Thinker takes over, he’s mighty interested in these salads that turn people invisible.

And yet, the feel is so completely different that it seems like two different stories. 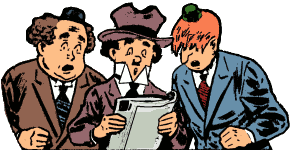 An unexpected discovery was a reference to the planet Karma, where the alien plant comes from. I’d seen two other references in other Golden-Age Flash stories, so it’s clearly part of the background mythos. This is one reason I’ve been looking for the source material. It’s relatively easy to find info on the leads, or the major villains, but the minor supporting characters who appear in three or four issues—Deuces Wilde, Evart Keenan, Dr. Flura, Ebenezer Jones—are mostly forgotten.

On a related note, while looking up the Thinker’s other appearances, I discovered that one of the non-Flash titles I’d been looking for, All-Star Comics #37, was reprinted in The Greatest Golden-Age Stories Ever Told—a book I already had. I felt bad that I hadn’t actually read the entire book, but that meant I could cross off two items from my wantlist instead of just one.

6 thoughts on “Who’d’a thunk it? (Uncovering the origin of the Thinker)”