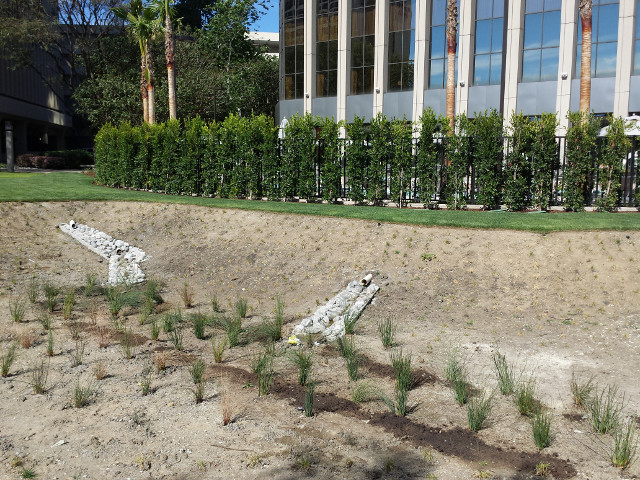 I’m still not sure how this new landscaping is supposed to work. My best guess is that the lower area is supposed to collect runoff and seepage from the surrounding lawn and other plants (and the street gutter behind me, interestingly enough) in order to reduce water usage and actually do something with water that would otherwise be sent into storm drains — a good idea in drought-stricken California.

There does seem to be a drain so that it won’t totally fill up in the rain, like it did a few months ago before they had all the plants in: END_OF_DOCUMENT_TOKEN_TO_BE_REPLACED

You’ve probably seen the story about how a group of teenagers showed that plants won’t grow next to a WiFi router. We did our own experiment, but first some things to consider about the story making the rounds:

Each bag contained one kidney bean, one black-eyed pea, and one seed from the red bell pepper I cut up for dinner. I put a section of select-a-size paper towel, folded twice, in each and set the seeds inside the second fold. Each bag got 15 mL of Brita filtered water and the air was squeezed out before sealing. Then I left them around the apartment for several days to see if they’d sprout. This is a picture of what resulted.

I wonder if the seeds in the school experiment just dried out. Katie sealed her seeds in plastic bags, which allowed radiation to pass through, but trapped moisture. As I understand it, the students watered their seeds throughout the experiment, but it’s possible the trays dried out overnight. Comparing moisture content/retention would be an interesting follow-up.

Obviously, this isn’t any more rigorous than the original experiment. But it shows that the results they found are the beginning of the process, not the last word. More importantly, it’s something you can easily test yourself if you’re so inclined. Next time you see a startling claim that’s something you can test without too much trouble, try checking it out for yourself.

Incidentally: We planted the seeds in our patio yesterday. With any luck, they’ll do as well as our tomatoes (and better than our poor carrots) this year! 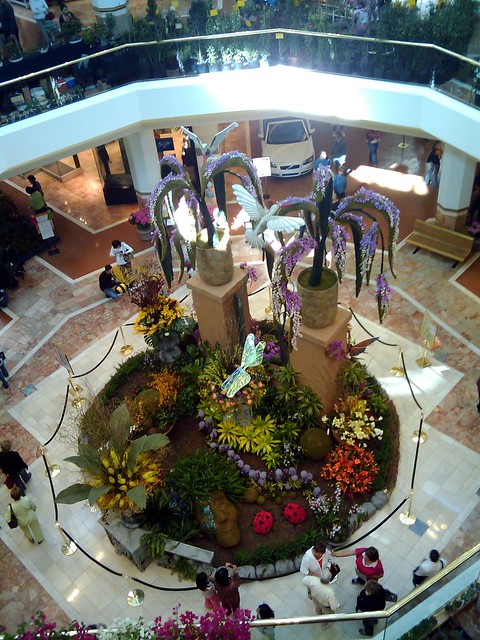 I braved South Coast Plaza this Saturday, and ended up in the middle of the Spring Garden Show, which took up all the non-store space in the wing formerly known as Crystal Court. I ended up wandering the garden show for a bit.

First floor was mostly furniture and decorations. The second and third floor were mostly people selling or showing off plants of various types, tools, pots, etc., with half of the third floor dedicated entirely to orchids.

There was also this huge centerpiece in the middle of the mall. Coincidentally, I was looking through old photos from one of our trips to Las Vegas earlier that day and found the pictures of the giant flower-and-insect display in the Bellagio.

I’ve posted a few photos taken with my phone.

After our trip to the nursery this weekend, Katie started seriously looking at our existing plants. We have a mint plant that got so pot-bound it grew down, through the drainage holes at the base of the pot, and back up the outside of the pot. She decided to make cuttings out of those bits… but what to put them in?

Well, she’d just finished off a container of baking cocoa… 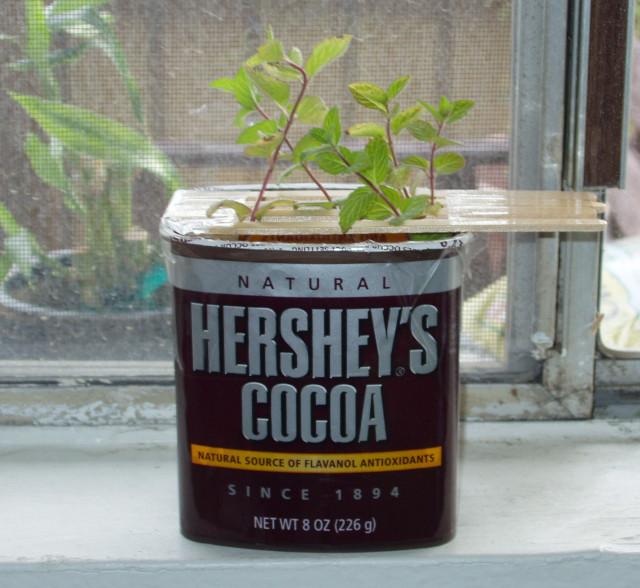